This is the writeup on Magnolia Pictures website for this film:  JIRO DREAMS OF SUSHI is the (true ) story of 85-year-old Jiro Ono, considered by many to be the world’s greatest sushi chef. He is the proprietor of Sukiyabashi Jiro, a 10-seat, sushi-only restaurant inauspiciously located in a Tokyo subway station. Despite its humble appearances, it is the first restaurant of its kind to be awarded a prestigious three-star Michelin Guide rating, and sushi lovers from around the globe make repeated pilgrimage, calling months in advance and shelling out top dollar ($300 per person) for a coveted seat at Jiro’s sushi bar. JIRO DREAMS OF SUSHI is a thoughtful and elegant meditation on work, family, and the art of perfection, chronicling Jiro’s life as both an unparalleled success in the culinary world and as a loving yet complicated father.

This film is a small window into the mind and soul of a consummate artisan who believes that he has yet to reach perfection in his craft. Jiro has spent a lifetime making sushi, and in doing so has come to understand the texture, taste, and intricate nature of fresh fish and seafood as perhaps only a few other Japanese sushi masters do. He loves his work and believes that we should all love what we do. Simply, Jiro believes: “You have to fall in love with your job. You must dedicate your life to mastering your skill.”

Jiro’s goal in his work is not to wow customers with his skills or to concoct some modern new cross-global cuisine, but to serve the most delicious food he is able to. He is not a rock star chef, does not have a television show nor does he insist on pointing the spotlight on himself. For Jiro, the reason for his lifelong journey to perfection and craft is to bring a  ‘sublime’ experience to his customers with his pure, unadorned sushi. He shines the spotlight on the fish and seafood, and other top grade ingredients, not his accomplishments.

We learn in the film that the ‘sublime’ may become the most difficult part for Jiro to achieve in the future. In the past, one of the components that Jiro has always relied on as a steady ally in his quest to create ‘sublime’ tastes is in peril. In a scene with Jiro’s son Yoshikazu and their long-time, trusted fish dealer at the Tsukiji Fish Market, we learn that problems with the supply of top grade tuna are occurring in Japan. Unlike Jiro’s fish vendor, few others in the market handle top grade tuna. For now, the supply of fish is OK, but the future is cloudy. There are several reasons for this.

The first reason given is that there were fewer sushi restaurants (and other types of restaurants that now serve sushi) in the past, and the best tuna was used only by those restaurants. Back then, the tuna coming to market were mature fish that had developed rich and succulent fatty meat. Tuna that would, in the hands of someone of Jiro’s skill, yield a sublime experience. Today, the demand for tuna is high, and fish are being caught younger to supply that demand. So the percentage of tuna reaching maturity is reduced. The un-spoken message in the conversation is that the quantity of younger tuna in the market puts a question mark on the future of mature fish and perhaps even on the sustainability of all tuna. On all fish, in fact.

As I watched this film I began to think that some of the situations facing Jiro are true for those of us selling premium tea, too. I began to think about established tea gardens with mature tea bushes and tea trees such as those found in various regions of China, Japan, South Korea, and Taiwan.  India and Sri Lanka, too, now have  mature tea gardens that were planted in the mid-to-late 1800’s in various locales. In the early 20th century these tea gardens were considered young and new, but over time these tea gardens have developed unique types of premium black teas which are essential to tea enthusiasts today.

But times have rapidly changed. Today, over 41 countries in the world grow tea. Many of these tea gardens have been planted in the mid-to-late 20th century. The majority of these tea gardens were planted to produce commodity tea, plain and simple. Some gardens were planted by commercial tea companies, other gardens by individual countries. At first this tea was intended to be incorporated into English-style tea blends to balance the cost of high-quality China, India and Ceylon teas.

But today, those same tea companies, and a fleet of new ones who supply supermarkets and quick marts with bottled tea drinks, have simply replaced the traditional teas with less costly teas from new places. It is a rare package of English Breakfast tea today that contains any India or Sri Lanka tea in the blend as it would have at one time – most blends now use tea from Africa and Indonesia.

The continued growth of these tea products requires that these companies concoct their blends without the addition of higher-priced teas. This is because established tea producing countries have neither the quantity of tea available nor tea at a low-enough price to be attractive to large tea companies. In order to secure enough tea for their needs, these companies must go farther afield and develop new tea growing areas and sources of inexpensive leaf. The historic context of fine, hand-plucked, mountain grown tea has becoming a myth in the world of general tea commerce.

The reality is that in these newly developed modern tea gardens tea plants are placed close together, fertilized heavily, and plucked intensively. Most are planted on pretty flat land. Much of this tea is harvested completely by machinery that cannot select  a specific leaf pluck – the machines simply shears off the amount that the machine is set to shear. As a result of all the above factors, these teas have a consistent style throughout the year but little in the way of flavor or distinctive characteristics. The objective here is high productivity, not sublime flavor. We know that Jiro would not be happy with those teas, and neither are we. However, we too, are determined to seek out and support as many artisan tea makers as we can, so that hopefully premium tea will continue to be sustainable far into the future. 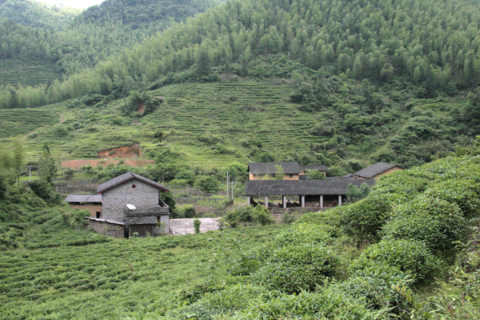 Conversely, most tea from established tea gardens is plucked by hand over the course of one, two or three seasons. (Much high quality Japanese green tea is plucked using hand-held machinery, but that is another story for another time). Tea manufactured on a seasonal calendar brings a unique set of stunning flavor and characteristics to the tea table. Working with nature and not in opposition to it has always produced the tastiest foodstuffs. Tea bushes that grow at a natural rate, and develop good root systems deep into the ground, and that are pruned only as needed to maintain good plant health yield tastier teas than plants that are force fed to grow rapidly and over-produce fresh leaf.

Like Jiro, we still believe in sublime tastes and sensations. And authentic, traditional tea. We throw our hat in the ring of the top grade producers who make seasonal tea. We know that every tea enthusiast who falls under the spell of flavorful, traditional tea is another small victory for handcrafted, conscientious manufacture, and meaningful tea, and we support that. 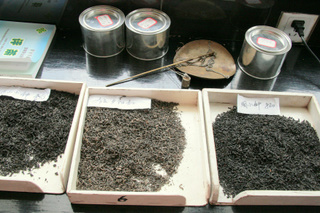 Our Blog Has Moved:

All information on Tea Trekker’s blog ( including but not limited to words, stories, educational PDF files, photographs, video tutorials etc., ) are the original, intellectual property of www.teatrekker.com and are protected by copyright law. Readers may not re-use or copy our words or pictures in any medium ( including any other website), or otherwise amend, distribute, transmit, re-transmit, modify or show in public any words or pictures appearing on Tea Trekker’s Blog without prior permission and proper credit to Tea Trekker.